An oak beam really is something to behold. These beams can be transformed into beautiful structural features bringing unrivalled character into your home. But how do you choose what type of oak beam is for you?

The Reclaimed Oak Beams are lengths of solid oak which have been removed from a building, intended to be used again. These beams could have been removed from old houses, barns and even some castles. This variety in origin gives each beam its own unique character that will not be matched. The knots, cracks, bangs and scrapes that each beam possess give a glimpse of their previous lives. One of the main advantages of choosing an reclaimed oak beam is their incredible stability. This helps to ensure that there is very little movement, making them suitable for a number of situations. 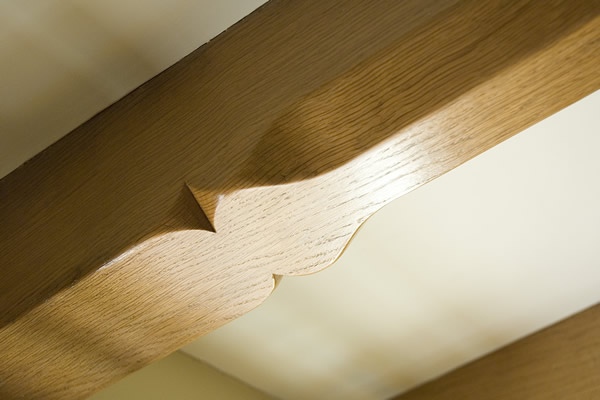 If the old antique look of the reclaimed oak beams is not to your taste, our other beams can be equally as effective.

Green oak is a term that is often thrown around a lot these days in the wood industry, but it is often misunderstood. Essentially our Green Oak Beams have been milled from recently felled trees, where the moisture content in the living wood is still present in the timber’s cells. As this green oak dries out, it will crack and change colour. This gives it a familiar style often seen in oak framed buildings around the country.

The high moisture content of the Green oak means it is often more favoured by craftsmen. This is because it is much easier to work with because of its softer nature. Oak which is older or that has been dried is generally much harder, making it more difficult to work with. As Green oak dries out, it will shrink, resulting in the joints tightening up. 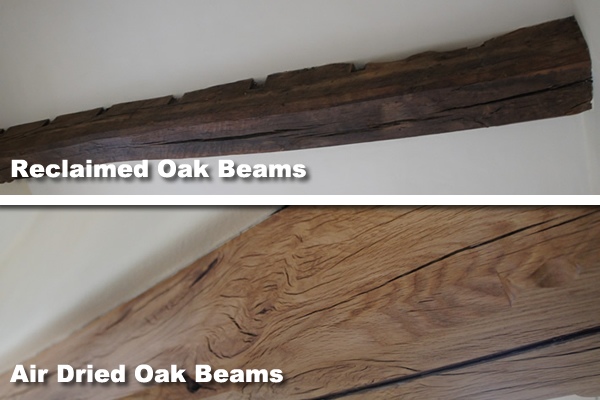 The final type of beams we have available are our Air Dried Oak Beams. These beams are exactly what they say on the tin, beams which have been specifically dried out by exposing them to air. For this process, a stack of newly sawn timber is stored in a cool and dry place. The rate in which these beams dry is dependent on the climatic conditions of the area and the airflow around them. To increase the rate of air drying, a continuous and uniform flow of air should pass through the timber pile.

Depending on the climatic conditions of the area, an air dried oak beam can take anything from several months to a number of years before they are ready to use. Although this process takes much longer than using methods such as kiln drying, this natural method will result in a much higher quality oak beam. As stated above a green oak beam will often shrink once fitted, whilst an air dried oak beam does the majority of their shrinkage naturally before they are fitted. All of the natural characteristics such as knots, splits, shakes and cracks are present in air dried oak beams, only adding to their unique character.