There's a potential national tragedy approaching with the continuing spread of Acute Oak Decline (AOD), a disease of native oak trees caused by a bacterial infection.

It's so serious that an infected oak tree can be dead within 3 years!

Forest Research, the scientific department of the UK Forestry Commission, has said that the new disease affects oaks more than 50 years old and that by their estimation, a few thousand trees in the UK could be affected.

AOD seems to attack only the two UK native oaks, the sessile oak and the pedunculate oak (Quercus robur) which is where our English oak flooring comes from. 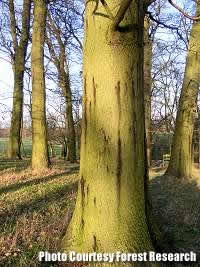 These beautiful old trees begin to weep or bleed, with dark fluid seeping through the bark and leaving the tree stained.

The incidence of AOD in Britain is unquantified at this stage, but estimates put the figure at a few thousand affected trees.

The condition appears to be most prevalent in the Midlands and investigations to determine the extent of the disorder are under way.

Anyone who remembers the Dutch Elm disease crisis of the 70s and 80s should be acutely concerned about the spread of AOD - especially as the oak is a national symbol of Great Britain.

We just hope the scientists can come up with something before it's too late.