It’s not every day you come across a 5,000 year old giant oak tree, but that's exactly what has been unearthed in a field in Norfolk. The 44ft Fendland Black Oak, or bog oak, was found buried away in farmland at Methwold Hythe, near Downham Market.

Bog oak is one of the rarest forms of timber in England which has been preserved in wetlands for hundreds or thousands of years. Bog Oak is the remains of a tree, that will have grown between lakes and swamps, in a pollution free atmosphere and is "comparable to some of the world’s most expensive tropical hardwoods".

Standing trees began to perish around 7,000 years ago as water levels gradually rose, resulting in the trees falling into silt that built up on the forest floor, leading to their preservation. 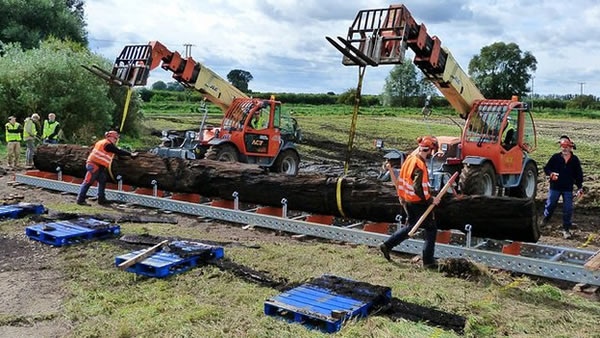 Experts believe that the Norfolk bog oak is "the largest-ever intact 5,000 year-old sub-fossilised trunk of an ancient giant oak", though they do think that it could just be only a section, possibly even a quarter, of the original oak tree.

The tree took a team of experts a day on Tuesday to unearth and mill on site to 10 planks. The wood is now being transported to London for drying.

Working as the Diamond Jubilee Fenland Black Oak Project, Hamish Low, a specialist of Adamson and Low, will lead a team of apprentice carpenters to create a 44ft table from the dried oak with the intention of putting it on show to the public.

"Most people in the woodwork business will think it’s a ridiculous thing to try and attempt, but they are digging up less and less bog oak and there is very little of it on show to the public".

"It’s only by developing techniques over 20 years we’ve even dared to try and attempt this".

Special thanks to the BBC for the above information and images.