A tree planting ceremony has recently taken place in Edinburgh in memory of the Nobel Peace Prize winner and environmental activist Wangari Maathai. Organised by admirers of Ms Maathai, around 60 people took part in the event at Figgate Park, Duddingston.

Wangari Maathai recently died in September at the age of 71 in Kenya. She was responsible for founding the Green Belt Movement, which is an environmental group focused on environmental conservation and women’s rights. In 2004, she became the first African woman to receive the Nobel Peace Prize for “her contribution to sustainable development, democracy and peace”. Among many other awards, she was granted the Edinburgh Medal by the Medical Research Council in Scotland in 1993.

Ms Maathai was an elected member of the Kenyan parliament between January 2003 and November 2005 and served as Assistant Minister for Environment and Natural Resources. “Her passion of the environment has led her to be labelled ‘mad’, publicly beaten, imprisoned and humiliated but she never gave up”. 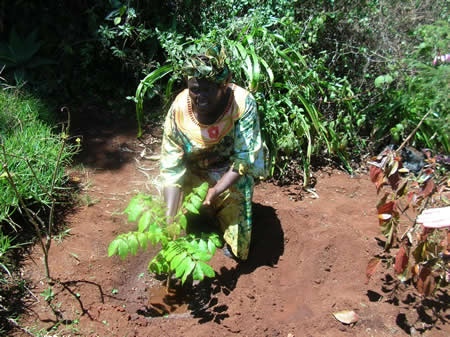 The Tree planting ceremony, entitled ‘A tree for Wangari Maathai’ was supported by the Edinburgh City Council who provided 50 oak and beech saplings and space in which to plant them. The ceremony followed a Facebook campaign which was launched by the Edinburgh social worker Mary Njoki.

Wangari Maathai inspired “many people from all over the world in planting billions of trees and millions in Kenya”.

Special thanks to The Green Belt Movement for the above image.