Ecologists have recently launched a campaign in a bid to protect internationally important lichens growing in a oak woodland at a national park in Pembrokeshire. The Ty Canol National Nature Reserve is just one of six sites in Wales which are home to the protected species.

Lichens are a cross between a fungus and an algae, and generally only grow in the most extreme environments of the earth such as hot deserts and rocky coasts. They can also be sometimes found on leaves and branches in rain forests and temperate woodland.

With around 400 species of lichen present in the Ty Canol National Nature Reserve, the species requires open, light conditions to thrive. Therefore park managers believe that they need to fell the trees to protect it. Pembrokeshire National Park woodland officer Celia Thomas, has since expressed how the authority has been contacted by some members of the public that felling trees would detract from the character of the ancient oak woodland. 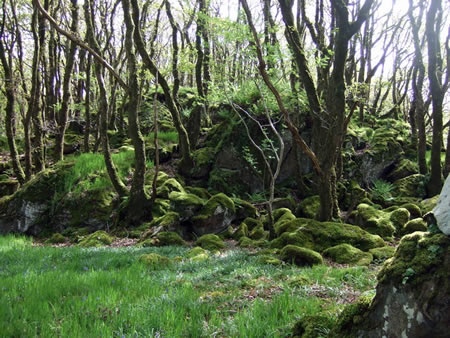 Celia Thomas has told BBC Wales how the lichens would be lost unless action was taken. She believes that “We have to act now to reopen the lost glades and thin out the tree canopy to allow more light to reach the rocks and trunks where the lichens grow”. Last winter ecologists numbered trees which didn’t have any lichen interest and have already secured a felling licence. Celia Thomas goes on to say how the felling process will be done gradually so that the woodland is not spoilt, in a plan to make the woodland better for the future.

The national park authority and the Countryside Council for Wales have scheduled a programme of management work, which is due to start in November. Special thanks to Geography.org for the above picture.