Following on from our earlier blog post of “Foreign Diseases Threaten Britain’s Trees”, we thought we would take the time to look into some more of the threats that could affect our oak population.

Sudden Oak Death is the name given to describe a disease caused by the oomycete plant pathogen, Phytophthora ramorum. This disease has had some devastating effects on the oak populations of California and Oregon and can also be found in parts of Europe. First discovered in California in 1995, the first symptom of its presence is a dark fluid bleeding from the barks surface. This has been known to kill trees in as little as four years.

Oak Wilt is a fungal disease that can generally be spotted by signs of leaf discoloration, wilt, defoliation and death. The fungus itself is spread from a diseased tree to a healthy tree by insect vectors or by connections between the different trees routes. 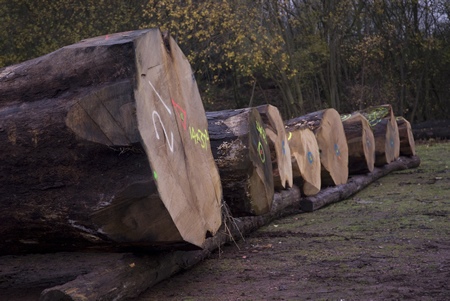 As well as diseases to the oak, problems to oak trees can also be caused by pests.

This term is used to describe a large number of different species of beetles who simply eat and destroy the wood. These beetles can be passed on in situations where the original lumber supply has been infected with beetle eggs.

The Oak Processionary moth is a moth whose caterpillars are a pest to the oak forests. They also pose a health hazard because of their poisonous setae (hairs) which can cause asthma and skin irritation. Like the beetles, oak is its preferred food source.